When entering Dominican Republic, you must purchase a tourist card which is only $10 but you must have cash! They will not accept debit or credit cards for the tourist cards, which is crazy because they accept cards everywhere else in the airport.

Please schedule your transportation from and to the resort before arriving. As soon as you receive your bags and exit to leave you will be bombarded by several taxi drivers. The Dominicans are a bit aggressive, so for my ladies expect to be cat called, blown kisses, and hassled about riding with them. It’s so many male taxi drivers outside trying to get your attention, that it becomes overwhelming. In some cases, the drivers are overcharging people for rides to their resorts. So to avoid the overwhelming feeling and the extra fees, arrange your transportation in advance.

Ok, I was excited that my phone worked for snapchat purposes only lol. Yes, I’m snapchat crazy, so I was happy that I was able to text and use my data if I needed to. Phone calls could be made at an additional cost. Your plan depends on your carrier. But don’t go on vacation with your head stuck in your phone. Enjoy the moments.

I was really surprised to see how rude some of the visitors on the resort were to the employees. The Dominican employees were going above and beyond to please some of these cowardly visitors and it was not appreciated. Some people were complaining about the most simple things and were not tipping. Knowing the country’s financial state and the average amount workers on the resort get paid, I tipped generously. The Dominicans do everything to make sure you have a great stay at their resort for a measly $8- $10 a day. Now I’m not saying you have to give everyone you see $10 a piece, but hand over a dollar or three and see how bright they smile. So smile and speak as you walk by and tip them, they will appreciate it.

Now before I went on this trip my sister warned me that the men are very aggressive. But I had no idea until my friends and I experienced it first hand. I had never been blown so many kisses, cat called, and so many sexual gestures until arriving in DR. The men are very open and honest and aren’t afraid to let you know how beautiful you are. The compliments are greatly appreciated but it doesn’t end there. If you smile a little too hard they are all over you and don’t give you the chance to breathe. For instance, I had a friend who met a Dominican man she flirted with a bit thinking nothing of it. Afterwards, he wouldn’t let her even interact with other men without him popping up. Even the women are aggressive. My male best friend encountered women who threw themselves all over him, literally. I just remember seeing a random woman jump in the pool and wrap her legs around him telling him how attractive he was. So I will just say that Dominicans are very friendly and don’t mind letting you know that you are beautiful. The thicker QUEENsized women are greatly appreciated there.

Dominican Republic has several excursions to choose from ranging from booze cruises around the island to horseback rides on the beach to swimming with sharks. My friends and I chose two different excursions and we had a blast on both. First, we chose the Marianum cruise which was not my choice at all. My best friend chose this cruise because he wanted to swim with the sharks. Now he kept mentioning that he wanted to swim with sharks but I didn’t know he was serious until we began discussing excursion options with a guide. So the boat ride to the Marianum was entertaining with fun tour guides, premium drinks, and music. I got a good tan and met good people. Cecil, my best friend, swam with sharks and stingrays and even got cool pictures with them. I enjoyed the boat ride and drinking in the shallow water of the ocean. Overall, it was a good time.

The second excursion was to the Hoyo Azul. The moment I saw pictures of the Hoyo Azul I knew I had to see it. The pictures didn’t do it any justice! When we first arrived, they had a small “zoo” which only consisted of a couple monkeys, snakes, and parrots. The animal keepers tricked me to take a picture with a snake around my neck. I specifically told him that I did not want the snake on me, I just wanted to be in the picture with Cecil as he held it. But as soon as I wasn’t paying attention the snake was around my neck and the camera was clicking. Now I tried to be a big girl and go with it but the moment the snake’s tail started wrapping around my waist, I freaked out. Hunny, I thought I was going to have a mild heart attack the tighter the snake got around my waist. While I’m freaking out, Cecil is smiling brightly at the camera not paying me any mind. (The pictures are hilarious) The hike to the Hoyo Azul was beautiful and full of laughs. The views were amazing and the weather was perfect; not too hot or cold. When we arrived at “the blue hole” I was in awe at how pretty the clear blue water was but I also was a bit hesitant because its 75 feet deep. After, watching others dive in and the non-swimmers chill on rock around the edge, I decided to join the non-swimming crew. The water was cooler than I would have liked but it was a great experience.

Overall, Dominican Republic was amazing.  I was happy for the four relaxing days with great people. Our trip was full of adventure and laughs. I came back home sleep deprived but refreshed. The Dominican Republic showed me a good time and I would recommend it to everyone.

Here are some of my favorite pics from my vacation below!

At the Hoyo Azul 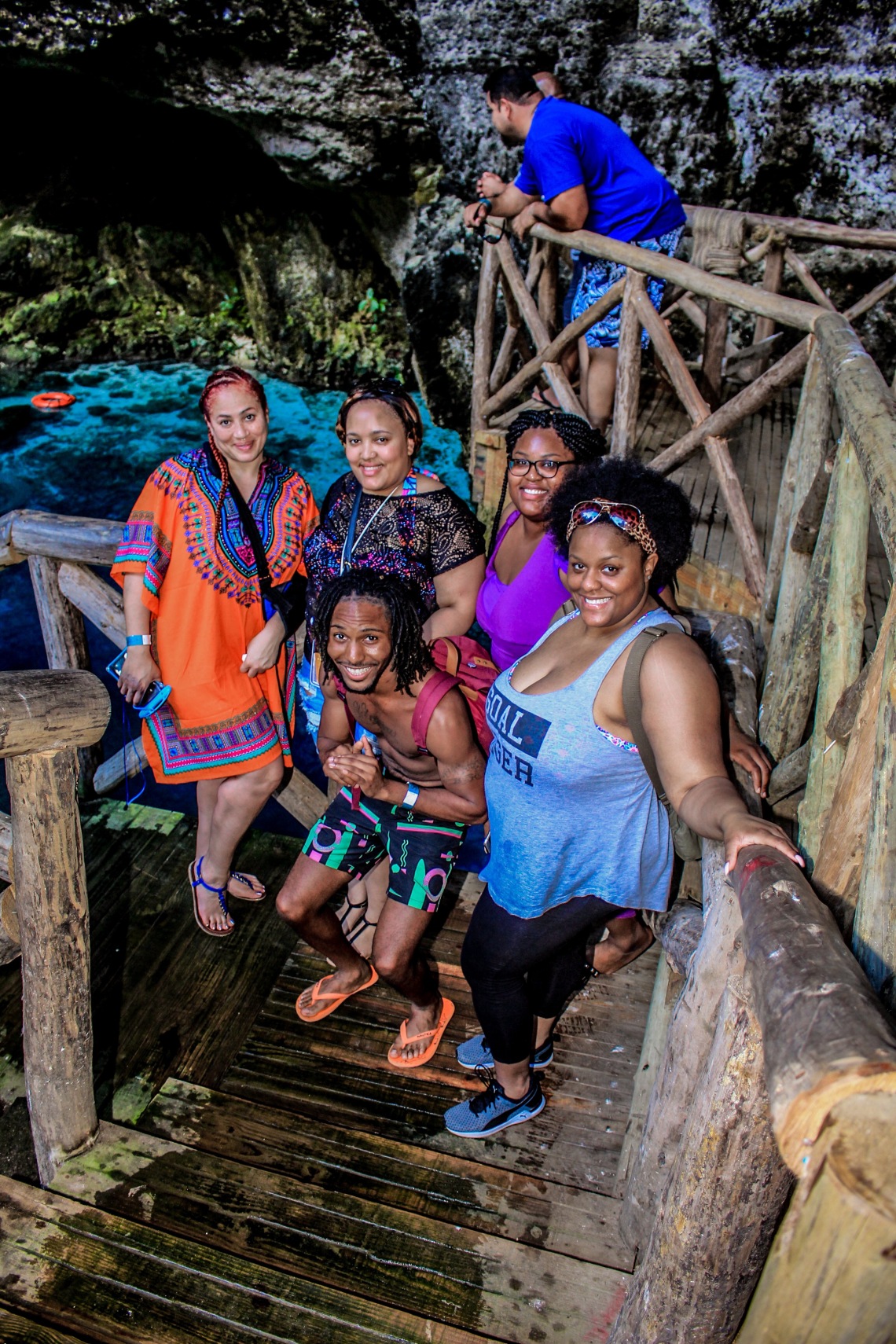 When I thought the snake was going to take me out! 🐍 but he’s smiling 😒 what a bestfriend he is. 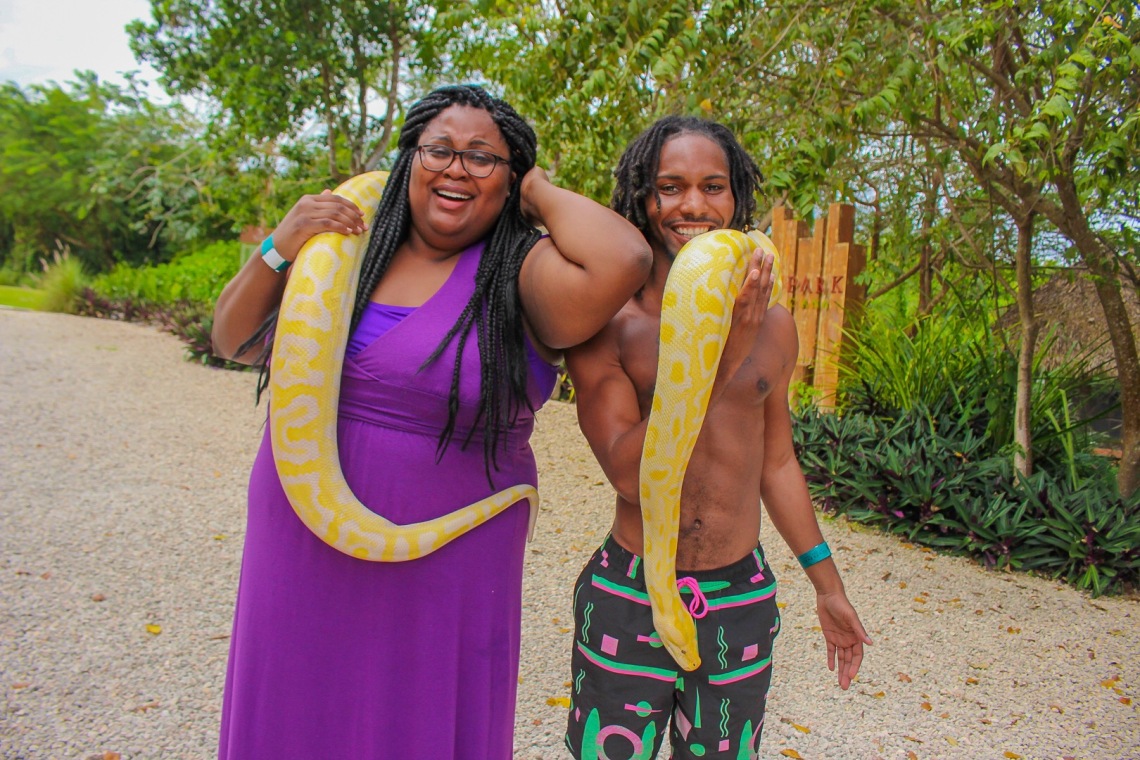 Because my bff and I are goofy! He asked to get on my back and I said what the hell! Hop on! Lol

Pictures from the resort

This site uses Akismet to reduce spam. Learn how your comment data is processed.